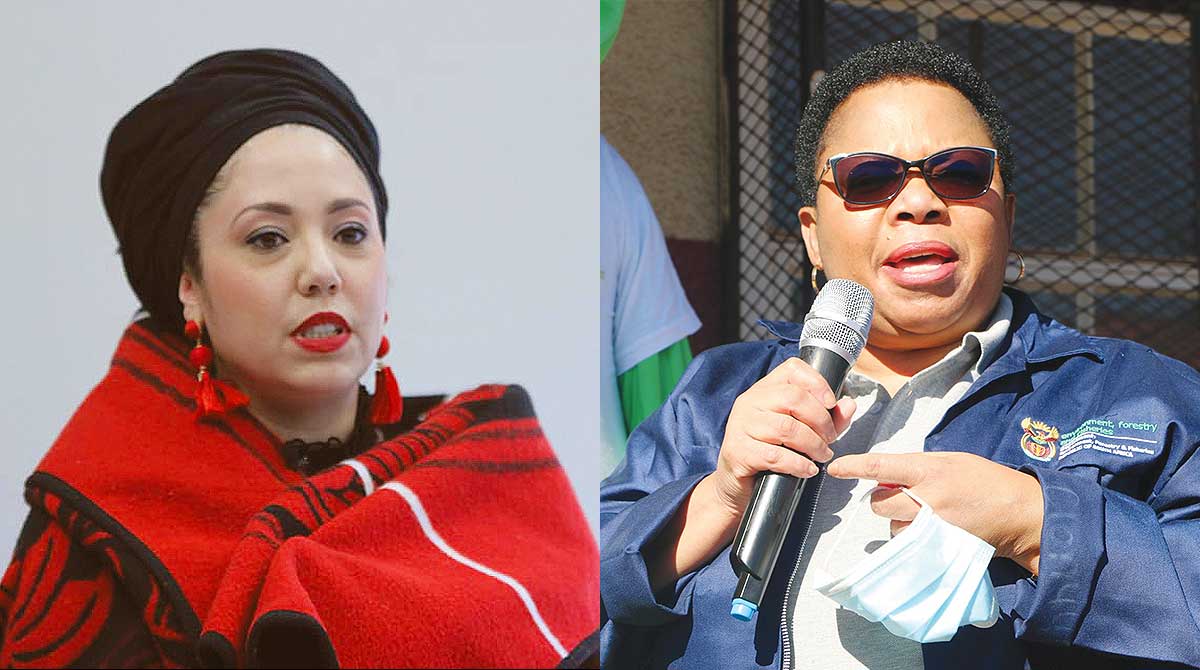 The community of the sleepy Xhariep district in the Free State will for a long time remember Friday, December 4, 2020 with unabashed nostalgia.

It is the day when residents from all walks of life put their personal differences and political persuasions aside and gathered at the local community hall to fight with fervent vigour, one common enemy – gender based violence.

Free State treasury MEC Gadija Brown led the galaxy of high-profile provincial government officials during this 16 Days of Activism on Violence Against Women and Children campaign.

The usually easy and unassuming Brown was a different ball altogether. She was not talking about departmental budget allocations or calling on truant municipalities to improve their audit outcomes.

That famous, infectious, and disarming smile that she almost always radiates around the corridors of her office – for half an hour or so – took a back seat.

She wore a different face, like a new dress and was in a genuinely a no-nonsense mood, talking worryingly about a subject that is close to her heart.

Before a package community hall at Gariep Dam, Brown’s sharp voice pierced the silent atmosphere as she demanded an end to the scourge of gender-based violence (GBV) that continues to mercilessly gnaw the social fabric of today’s society and make a mockery of our long-held and cherished spirit of ubuntu.

It was clear she missed those respectful communities where men protected women and children, and not abused them, where men were honourable and took every woman as their sister, mother, aunt or daughter and jealously guarded them.

Fellow Free State MECs; Makalo Mohale (Destea) and Thembeni Nxangisa (Cogta) – known for their passion for women emancipation and empowerment – were also there to lend their support to the anti-GBV crusade.

Brown said the negative impact of violence is wide and everyone must start by challenging cultures which perpetuate this social ill.

Government recently passed customary laws that help women to protect themselves and make decisions that affect their lives, she noted.

Communities should not look away but report any form of abuse, she urged. “We’re able and capable of stopping GBV. Remember violence affects families in many different ways.”

The MEC told the resident that the Department of Social Welfare provides counselling to those affected by GBV.

There is also a national toll free number for people who do not want to talk to a professional face to face.

In addition, several non-governmental organisations also offer counselling and support to victims of violence or those threatened by it.

Brown is convinced that government has adequate legal instruments to deal with violence and “we just need to communicate this information to the public if we’re to end this circle of abuse”.

Kopanong District Municipality mayor Xolile Thomas Matwa was the first to set the ball rolling, paying tribute to women and children killed by those who were supposed to protect them.

“Every day we witness murders of women and children. We must remind perpetrators that this kind of behaviour is not tolerated or supported. It’s more important than ever to join our hands together to fight abuse,” he pointed out.

The Deputy Minister of Environment, Forestry, and Fisheries, Makhotso Sotyu, told the residents – pregnant with expectations and excitement to see their leaders – to be wary of the different kinds of abuse so that they are able to deal with them appropriately.

Sotyu, who met the residents after touring the R3 million China-South Africa Aquaculture Technology Centre, said abuse comes in many forms such as harassment, economic abuse, and families not sending their children to school.

She noted it was also worrying that sometimes victims withdraw cases against their abusers and end up being killed by the same people.

“We shouldn’t allow situations where women are abused on a Friday night after a drinking binge and persuaded on a Monday morning to withdraw cases or asked to forgive and forget. We should not be deceived by a bunch of flowers from their abusers. This must stop!” said a tough-talking Sotyu who hails from the Free State.

The deputy minister did not have kind words for perpetrators of violence, describing them as worse than animals, saying: “Animals know how to protect their women and children.”

She added: “The moment a man says I’m sorry I was under the influence of alcohol of nyaope, it clearly shows he planned to attack and harm his victim. This is unacceptable.”

Unpacking violent traits, Sotyu indicated physical abuse usually starts with shouting, clapping the victim, until it grows into something big and uncontrollable.

Some men were also victims of abuse and afraid to report to police in case some officers laugh at them. To address such situations, the government established the Independent Police Investigative Directorate (IPID) to investigate complaints against police officers.

“When you’re abused don’t keep it to yourself because this encourages further abuse. It is important to alert authorities when there are signs of abuse to ensure it stops,” she told the community meeting.

She said people must be taught about their rights so that they know what to do when they are violated.

As we left Gariep Dam with my host, Government Communication and Information System Free State Provincial Director, Yolisa Blom, I looked back and could not help but admire the giant dam – South Africa’s largest water source – fast disappearing into the distance, silently pondering and dreaming of its future.