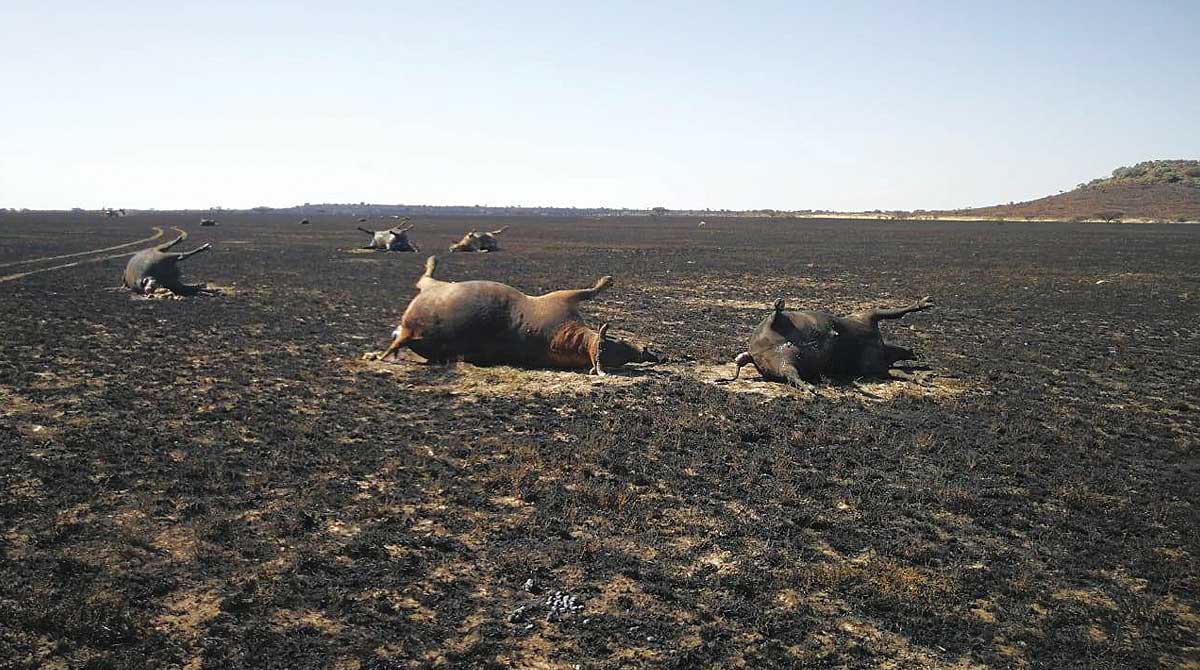 The agriculture sector in Hertzogville and the surrounding places is under immense pressure after wild fires destroyed nearly 100 000 hectares in the past few days.

The fires reportedly started on Sunday when service delivery protesters burned tyres on the R708 road between Hertzogville and Christiana.

Olivier said the fires had spread in the direction of Boshof and Kimberley.

“It goes without saying that we are hurt and shocked to the core, but we are not without hope. Every time the direction of the wind changes, it ignites old flames. We are evaluating the damage. Farmers can’t get to computers because they are busy fighting the flames,” he indicated.

“Thank God not all of us suffered losses. We can help other farmers. We are highly upset with the people who started these fires, but we love South Africans and it is our goal to produce food and nutrition for our growing population. Even if you kill us one by one, we won’t stop farming and will keep looking after our animals and plants. We love what we are doing,” vowed Olivier.

He said one Hertzogville farmer lost livestock valued at R900 000, and the damage to the infrastructure on his farm amounted to R3 million.

Free State Agriculture (FSA) has made R100 000 available from its Disaster Fund for the transportation of animal feed to the affected areas.

Hundreds of animals, including cows, buffalo and antelope, reportedly died in the fires.

Hertzogville veterinarian Nico Hendrikz said not all the animals which died in the fires had been accounted for, but the numbers were high.

Interim figures showed that close to 300 cows died in the fires.

“A lot of cows had to be euthanised. The damage is so big that they couldn’t be treated. We tried emergency treatments on some of the cows just to save some of them for the farmers, but many died during the transportation process,” pointed out Hendrikz.

He added various reports of livestock succumbing to the blaze have also been received, with farmers still searching for animals that fled the blaze.

The fire spread to nearby farms.

Free State police spokesperson Brigadier Motantsi Makhele confirmed that 17 people had been arrested and appeared in the Hertzogville magistrate’s court on Tuesday on charges of public violence and malicious property damage.

He added 11 people were arrested on Sunday and the rest were taken into custody on Monday.

They all were granted bail of R1, 000 but seven could not afford bail and would remain in custody.

The suspects will make their next court appearance on November 5.