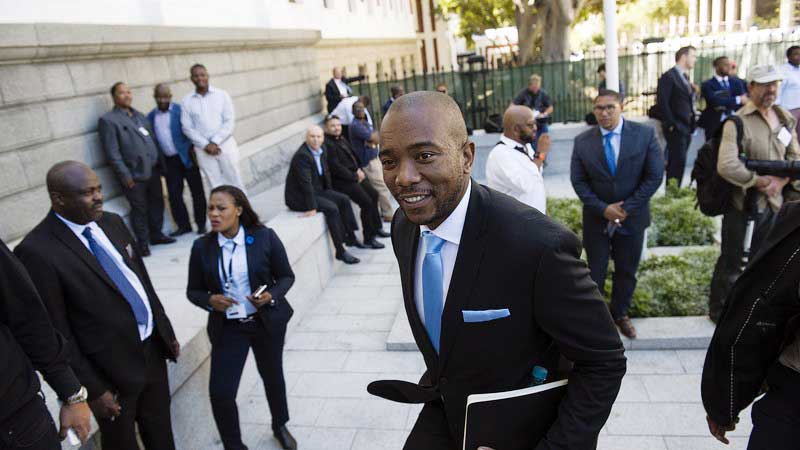 The Democratic Alliance (DA) has had a very incompetent and weak leader in Mmusi Maimane. Granted, this statement may be extreme, but it is appropriate given that Jacob Zuma’s removal as ANC leader has seen the gradual decline of Maimane in the DA.

It is now time – especially in light of the upcoming elections – to take stock of the damage Maimane could cause his party at the ballot box.

Zuma’s depravity served as cover for Maimane’s inability as a politician and party leader. But Cyril Ramaphosa’s appointment as ANC leader and head of state has exposed Maimane’s shortcomings earlier than expected.

Maimane’s election as the DA leader in 2015 took place against the backdrop of the party’s avowed intention of taking over the government of the country.

In this regard, Helen Zille, previous leader of the DA, was farsighted: she realised quite early on that that ideal could be realised only with the aid of large numbers of black votes for the DA.

She contended that the election of a black DA leader was a prerequisite.

Millions of black voters, who were beginning to feel alienated from the ANC because of the brutal removal of Thabo Mbeki and the rise of the traditionalistZuma, were ripe for the plucking.

But by 2011 Zille faced a colossal dilemma: the DA did not have prominent black leaders to reap that harvest. Zille opted for Lindiwe Mazibuko (then only 31) as candidate for the position of parliamentary leader.

The peace between Zille and Mazibuko was short-lived, allegedly because they clashed about controversial caucus decisions. Be that as it may, many political commentators and politicians inside and outside the DA were sceptical about whether she met the requirements for this challenging job on account of her youth and lack of parliamentary experience.  In 2014, Mazibuko exited, unheralded.

As if Zille had not learnt from the Mazibuko experience, she turned to another young black DA member, Mmusi Maimane, to gather new black voters. In May 2015, allegedly at Zille’s insistence, Maimane was elected in her place as party leader.

I was already sceptical at the time, because his election was proof that the DA had bought into the trend, evident internationally and locally, that political parties move away from the “far right” or the “far left” to the moderate and acceptable centre of politics, merely to win elections.

Ideas then cease to take precedence, which leads to the gradual erosion of the intellectual gene pool in political parties and also in communities. Deeper interpretation or the intellectual grounding of concepts recede or become extinct.

It is clear that bread-and-butter issues – or the economy – are key priorities for communities.

Worldwide, workers are experiencing an economic decline, mainly because they feel left behind by globalisation. This feeling was strong among marginalised voters in the United States in 2016 and played a crucial role in Donald Trump’s unexpected victory over Hillary Clinton.

The “centre right” results of the European parliamentary elections in 2014 (and the British elections in May 2015) were clearly influenced by the economic concerns of Europeans and the political shift to that position over the past 14 years of European politics.

In South Africa, the focus on radical economic transformation has deteriorated into the relentless pursuit of resources and the plundering of state coffers. The direct causes of this are reckless populism among the youth and the erosion of the much-needed intellectual class in both the ANC and the DA. The removal of Mbeki, an intellectual economist, to make way for the unskilled Zuma and the appointment of the inexperienced Maimane over the highly regarded intellectual Dr Wilmot James are practical examples.

With Maimane’s election, the DA overturned everything – experience, their classical or neoliberal ideas and intellectual ability – just to be able to compete with the ANC at the centre-left spectrum of politics. It was done purely to attract more black voters in order to win elections without giving serious thought to the challenges and the future of the country.

Despite this criticism, Maimane initially resonated with many South Africans, because he was young, fresh and black to boot – in sharp contrast to Zuma, who was regarded as incompetent, corrupt, arrogant and bored.

A lively orator, thanks to his years behind the pulpit, Maimane soon got the better of Zuma in Parliament, labelling him a “broken” president, to the delight of many. Focusing on Zuma’s faults and shortcomings served him well for a very long time because he was able to hide his own inability and shortcomings. This could not last forever, however.

The euphoria of the 2016 municipal elections, when the ANC lost three large metros to the DA/Economic Freedom Fighters (EFF) coalition, soon made way for DA infighting and racial debates, making enormous demands on Maimane’s leadership ability. He was accused of having limited knowledge about the Constitution after he made ambiguous comments to explain his stance on the death penalty.

The water crisis in Cape Town, Zille’s contentious tweets defending the consequences of colonialism and the falling-out with Cape Town mayor Patricia de Lille all assisted to catapult the DA into mayhem. Maimane’s announcement in October 2016 that the DA would diversify its leadership, so that all party structures from branch to national level should set targets for the recruitment and development of exceptional black candidates for public office, added oil to the flames.

“Going black”, however, was in line with Maimane’s approach to race – as former journalist turned academic Christi van der Westhuizen stated – which meant a break with the DA’s liberal tradition.

It is not that surprising because liberalism has become problematic in South African history, because it is based on colour-blindness, which is not in line with our colonial and apartheid realities.

Maimane’s statement: “If you don’t see that I am black, you are not seeing me” is indicative that he intends to confront the (neo)liberal traditions of the DA head-on because, despite the failures of neoliberalism, the DA’s faith in it is unshaken and any attack on it is regarded as an attack on whiteness.

This has split the DA into two groups – the one black (social democrats) and the other white (liberals/ “liberal core”) – who are engaged in a fierce battle for the soul of the party.

In an attempt to entrench the social-democratic and black nature of the DA, Maimane appointed the young and well-spoken Gwen Ngwenya, 29, as MP and head of policy. This was a tactical error because Ngwenya, who was tasked to develop a new policy directive on broad-based black economic empowerment, is actually an arch-conservative opposed to it.

What makes matters worse is that Ngwenya, just like Maimane and Mazibuko, is too inexperienced for her position. None of them have a significant power base in the DA.

To date, Ngwenya, who recently resigned her position as head of policy, has failed to formulate any new DA policy – something for which Maimane will pay a high price in future. This will happen because the “liberal core” proponents within the DA, including Ngwenya, do not embrace a race-conscious and transformative political outlook in its election offering.

In addition, Maimane is under pressure from two minority groups (white and coloured Afrikaans-speakers) who, for years, have kept the DA alive at the ballot box. Whites, particularly, are concerned that the DA has not taken any stance on the seemingly systematic abolition of the Afrikaans language and about Maimane’s remarks on white privilege and black exclusion. The coloureds are worried about affirmative action and how this has affected them, especially in the Western Cape.

In recent years, the DA has attracted South Africans of different backgrounds with diverse ideological views.  Maimane is under enormous pressure to keep these different interest groups, with different backgrounds, happy in the party. These groups are now locked in battle, unashamedly competing to represent and promote their interests inside and outside party structures.

Maimane is caught between a rock and a hard place and is battling to navigate his way through the pitfalls and landmines of the political landscape. He has consequently been criticised for being a stylised politician without a backbone.

The lack of credible black leaders in the DA saw Maimane being pulled from his comfort zone behind the pulpit into the political arena. He is essentially a reluctant political participant who has never really had a well-seasoned political strategy and vision. Maimane operates, like most clergymen, from a theological reference frame that has little or no space for other social influences.

His task to grow the DA is complicated further by the election the credible, modern technocrat Ramaphosa, who is getting rid of the Zuma baggage and building a new ANC.

Make no mistake, Maimane is young, dynamic, well spoken and intelligent. But intellectual ability must be accompanied by political experience. The DA is currently rudderless and without any useable ideas or policy to provide answers to the complex post-apartheid political, social and economic challenges.

The latest Ipsos opinion survey indicates that the DA will receive only 14% of votes in the upcoming elections – compared with 22.23% in 2014 – which is possible proof of Maimane’s inadequate leadership.

Maimane has also failed to command authority and respect from mainstream black political parties such as the ANC and the EFF. Worse, he has failed to maintain authority in the DA itself. Against this background, it is probably not difficult or unfair to conclude that this must be at least partly because Maimane is black.