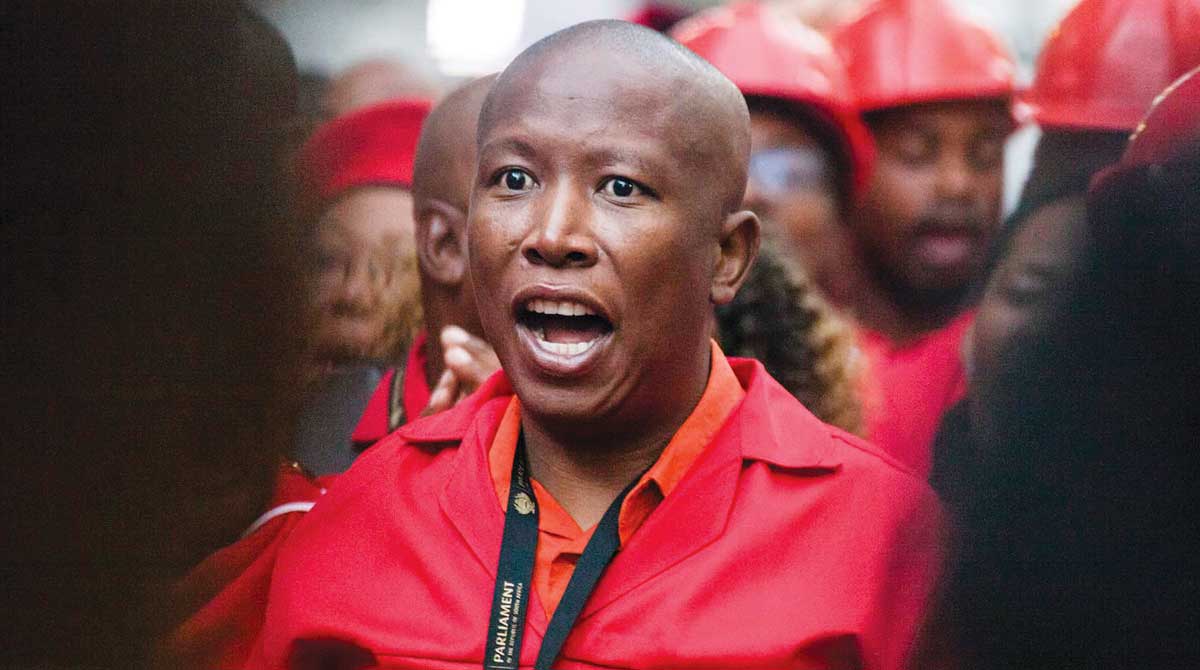 EFF leader Julius Malema has called on “African brothers and sisters” to rather direct their anger at the “owners of wealth … white monopoly capital”.

He was reacting to widespread reports of xenophobic attacks throughout South Africa against African immigrants, particularly in Gauteng, where five lives have now been lost.

“Our anger is directed at wrong people. Like all of us, our African brothers and sisters are selling their cheap labour for survival. The owners of our wealth is white monopoly capital; they are refusing to share it with us and the ruling party ANC protects them.#OneAfricaIsPossible,” Malema tweeted.

AfriForum deputy CEO Ernst Roets shortly thereafter called the tweet “nothing other than a racist incitment of violence against minorities. Violence against any community has to stop. It should not be directed at anyone else. The world should take notice of the persecution of minorities in South Africa.”

However, Malema responded hours later by writing that it was allegedly white people who had created the xenophobic tension by supposedly telling black people that “foreigners” had taken their jobs.

“We are fighting for cramps [sic],” he noted.

The EFF official account called on its followers to “unite against the common enemy” and claimed that borders were imposed on the continent by colonialists.

They used Marxist language describing colonists as the ones still controlling the continent’s resources and the “means of production”.

There have been reports of Africans on the continent taking revenge at the xenophobia, with one report of an MTN story being looted in Nigeria, and further reports of a Shoprite store being targeted too.

He called Myburgh a fool.

President Cyril Ramaphosa vowed to clamp down on the ongoing violence on Tuesday and the African Union, Nigeria and Zambia condemned the attacks.

Hordes of people – some armed with axes and machetes – gathered in Johannesburg’s central business district for a third day of unrest directed against foreigners, hours after mobs burned and looted shops in the township of Alexandra, prompting police to fire rubber bullets to disperse them.

Five deaths – most of them South Africans – have been reported, police said, adding that 189 people had been arrested.

In a video address broadcast on Twitter, Ramaphosa said attacks on businesses run by “foreign nationals is something totally unacceptable, something that we cannot allow to happen in South Africa.”

He said, “I want it to stop immediately. The violence had no justification.”

Sporadic violence against foreign-owned stores and enterprises has a long history in South Africa, where many locals blame immigrants for high unemployment.

The country is a major destination for economic migrants from neighbouring Lesotho, Mozambique and Zimbabwe. Others come from much farther away, including South Asia and Nigeria, Africa’s most populous country.

Gavin Booldchand, who lives in Coronationville, a low income suburb west of Johannesburg, said he witnessed one of the killings on Tuesday, which was blamed on a Pakistani store owner.

“The owner of the shop shot him straight into the face,” Booldchand told AFP. “He didn’t have to shoot the guy like that you know.

“People are taking our jobs and stuff (and) it is our country after all.”

This week’s assaults appear on a greater scale than in the past, although the full details remain unclear.

“They burnt everything,” Bangladeshi shop owner Kamrul Hasan, 27, told AFP in Alexandra, adding that his shop gets attacked every three to six months.

“All my money is gone. If the (South African) government pays for my plane ticket, I will go back to Bangladesh,” he said.

The violence and looting of shops occurred in Johannesburg and surrounding areas.

Similar incidents occurred in the capital Pretoria on Monday, when local media reported shacks and shops burning in the Marabastad – a central business area largely populated by economic migrants.

Nigeria summoned its South African ambassador to express “displeasure over the treatment of her citizens” and said it would dispatch a special envoy.

Separately, African Union chairperson Moussa Faki condemned the violence “in the strongest terms” but said he was encouraged “by arrests already made by the South African authorities”.

Zambia has cancelled an international friendly football match which was slated for Lusaka next weekend against South Africa.

“This is because of the security concerns, you never know what can happen,” Football Association of Zambia (FAZ) secretary general Adrian Kashala, told AFP.

He noted, “We want to be sure of the security of (the) visiting team”.

The attacks on foreign stores began a day after South African truckers started a nationwide strike on Sunday to protest against the employment of foreign drivers. They blocked roads and torched foreign-driven vehicles mainly in the southwestern KwaZulu-Natal province.

“We are a nation founded on the values of ubuntu (humanity) as espoused by our founding father, President Nelson Mandela… we should always resist the temptation of being overwhelmed by hatred,” he said in Cape Town on Tuesday.

David Makhura, the premier of Johannesburg’s Gauteng province, said rioting was not a solution.

“This issue can be dealt with without resorting to xenophobia,” Makhura told reporters. “There is no country that does not have foreign nationals.” -Citizen