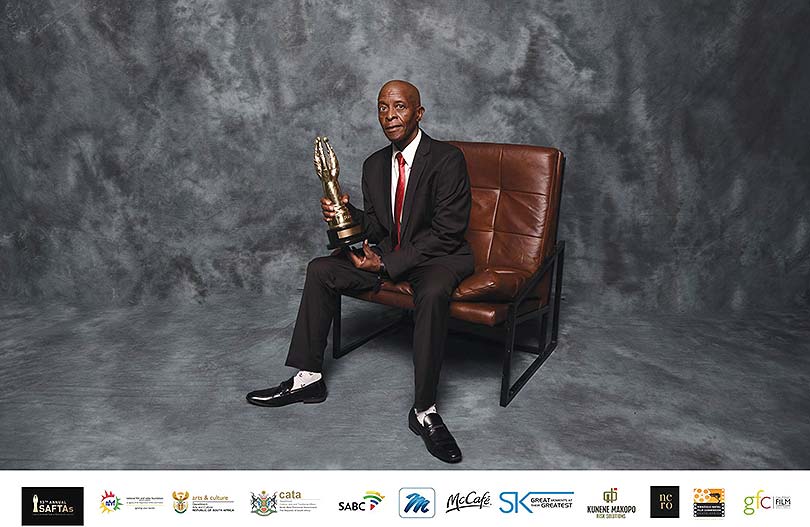 The 13th edition of the South African Film and Television Awards (Saftas) took place over the weekend to honour the crème de la crème in South Africa’s film and TV industry.

The Saftas took place at Sun City and were hosted by Pearl Modiadie and Thomas Msengana under the ‘Dare to Dream’ theme – a celebration of the industry’s tastemakers and personnel who go against the grain in the pursuit of their dreams.

Renowned author, actor and playwright Khotso Nkhatho, who appeared in the well-known television series Mopheme in the 1980s, and recently in Rhythm City, was given a Lifetime Achievement Award.

The recognition comes as no surprise, with some in the industry regarding the acknowledgment as long-overdue. Currently, executive drama producer at Lesedi FM, the legendary actor`s career in television, radio plays and theatre spans over a period of 40 years.

Born in the dusty streets of Mmamahabane in Ventersburg, Free State, Nkhatho`s hard work and diligent ethic led him to be appointed as executive drama producer in 2007.

Reflecting on his achievement, the ever-humble legend said he was humbled by the recognition, saying, “Am truly humbled that God afforded me the opportunity and strength to see this day. Am truly grateful that my work has been given the recognition it deserved.”

Osmund Casting Pty Ltd, a casting agency representing Nkhatho said it was proud of the achievement and milestone in the lifespan of his career.

“It is a well-deserved honour indeed worthy of a gentleman who has dedicated and shown passion, commitment, talent, humility, professionalism and his in-depth knowledge and experience to every project he gets involved in whether it is in a writing, producing or acting capacity,” said Kgosi Monye, producer and casting director representing Nkhatho.

Monye, also an actor and presenter in his own right, added that it was all these elements combined that have sustained the legendary actor throughout the cut-throat industry.

“In an era where the industry is constantly changing and adapting to new trends with social media playing a huge role in how productions or brands associate with you based on the number of Twitter, Facebook or Instagram followers you have, he defied the odds and used his God-given talent to stay relevant.

“With his most recent work as an actor on Rhythm City as Lerumo, his knowledge and passion for his mother tongue , Sesotho, saw him being brought in as a language advisor as well to give substance and authenticity to the storyline,” said Monye.

The soft-spoken Monye, also from Bloemfontein, said the industry would continue to benefit from Nkhatho’s knowledge and programmes are in place to continue sowing the seeds and uplifting talent, especially from the Free State Province.

“We thank the NFVF, SAFTAS, SABC, E-TV, and industry in general for acknowledging him while he is still with us…” Monye concluded.