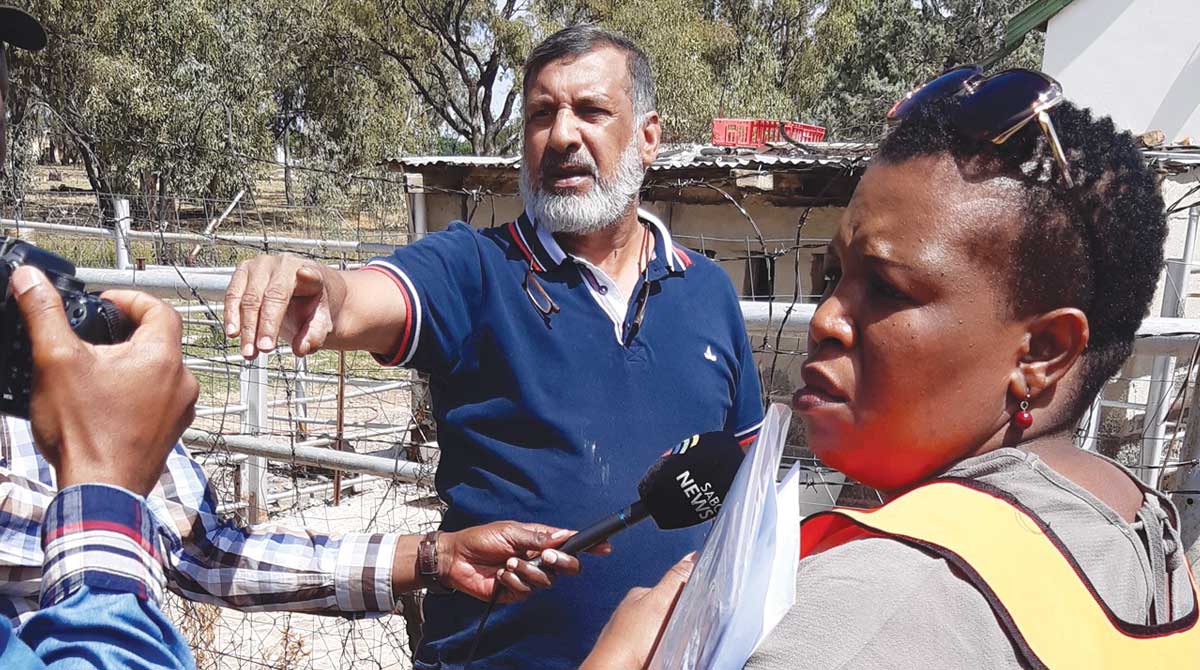 The national Department of Water and Sanitation (DWS) has laid criminal charges against an abattoir owner in Clocolan for polluting the environment after failing to properly dispose of the waste from his operations over the past few years.

Officials from the DWS on Tuesday laid criminal charges against Shek Mahomed, who owns Mahomed’s Halaal Abattoir in the small farming town of Clocolan, about 165km east of Bloemfontein, for contravening sections of the National Water Act by not taking adequate measures to ensure waste from the abattoir does not contaminate the environment.

The abattoir, which slaughters cattle and sheep on a daily basis, was found to be illegally disposing water containing blood, fats and grease, carcasses, animal skins and hooves, thereby potentially polluting a nearby wetland and a small dam.

DWS Director for Enforcements Thandi Mopai told journalists during a visit to the abattoir to ensure compliance that Mahomed failed to comply with waste water management regulations since 2016 thereby endangering the ecosystem around the area.

“Waste from the abattoir was being disposed into three pits and further discharged from the third pit via a channel to the environment without any water use authorisation,” said Mopai.

“We engaged with him several times and came to do follow up inspections… He shows that he doesn’t want to comply with our legislation. So, we ended up issuing a directive that, since you failed to implement our initial directive, we will implement it ourselves and then you will incur the costs. We also said after doing that, we will open a criminal case against him,” Mopai added.

While others were laying the criminal charges at the Clocolan Police Station, another team from the DWS was carrying out excavation works at the abattoir to ascertain what’s buried underground as well as inspecting the rest of the premises for compliance.

Mahomed, who was initially aggressive towards the DWS team and journalists, later agreed to cooperate after the shortcomings of his operations were pointed out to him.

“Why do you people want to make it a big issue when there is just a small problem? There is raw sewage flowing on the streets in the location, where people live. I just had a small problem because the municipality was not collecting waste from here but I have since addressed it,” said a miffed Mohamed.

It was however found that some of the adjustments he claimed to have made still didn’t meet the requirements and the DWS proceeded with their enforcement exercise at the abattoir.

The DWS felt the waste disposal system at the abattoir could result in the pollution of the water resource as raw effluent was being disposed onto the open environment where a small stream also flowed.

The department was concerned that abattoirs use large amounts of water in animal processing operations and it’s therefore important that the waste disposal meets set regulations.

It said approximately 84 percent of this water is discharged as wastewater effluent containing high organic loads such as acids, various complex chemicals and solids.

It was also feared that skin preservation by dry salting, a common procedure at small abattoirs that are remote from tanning operations, could affect the environment if not disposed of properly.

According to the DWS, effluent from drying sheds could be highly saline and may have a very high biochemical oxygen demand. It also contains high levels of fluoride, since the salt used contains up to one percent sodium fluoride as a bactericide.

“This may lead to salinity problems if the effluent is irrigated, and also to fluorosis problems with vegetation, including tree deaths. This waste stream must be segregated and diverted to an evaporation pond for conversion to a solid waste for potential recycling,” noted the DWS in a statement.

The contaminated stormwater can have detrimental environmental effects on surrounding ecosystems, the department added.