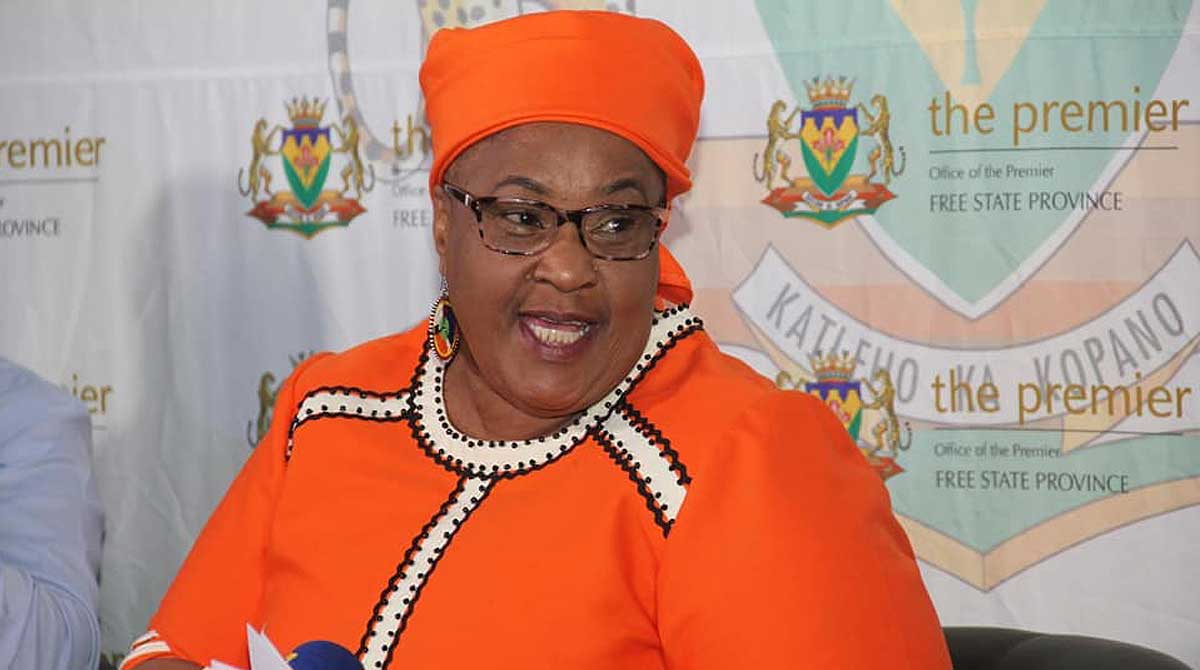 The Free State has put some of its district hospitals on standby to be used as isolation centres should there be a sudden spike in the cases of the deadly coronavirus in the province, Premier Sisi Ntombela said.

Addressing journalists at a media briefing in Bloemfontein on Wednesday, Ntombela said while Pelonomi Regional Hospital has been designated as the main isolation centre that can admit patients in the province, district hospitals may also be used in order to increase the number of beds available.

“We have decided to arrange with other hospitals so that we can have more beds ready,” noted Ntombela.

Pelonomi Hospital presently has 38 beds in the isolation unit.

The Free State has not recorded any case of the Covid-19 but the Premier said they were not taking chances as the situation could change at any time. South Africa has a total of 116 confirmed cases.

“We will have a total of 114 beds, including those at district hospitals,” she added.

Health MEC Montsheng Tsiu confirmed during the media briefing that Alfred Nzula Hospital in Trompsburg and Senorita Nhlabathi Hospital in Ladybrand have been earmarked for that purpose because some of the wards are not always used.

Tsiu said other district hospitals could also be considered should the need arise but they were also engaging private hospitals for more beds.

Ntombela announced the province will hire at least 1 000 nurses on contract to man the isolation units and help in the tracing of people who made contact with those who tested positive to the novel coronavirus.

“We are going to employ 1 000 staff nurses to ensure everything goes well,” said indicated.

Before the briefing, the Premier met with heads of municipalities and MECs to discuss the provincial plan to address the challenges presented by the Covid-19.

She indicated municipalities had been be instructed to ensure residents have access to clean drinking water as the fight against the virus requires that people wash their hands regularly.

She singled out Maluti-a-Phofung Local Municipality where residents recently shut down the town after they took to the streets demanding water, adding everything is being done to ensure the situation improves.

“I can assure you we are working 24 hours (a day) to ensure that the people of Maluti-a-Phofung have water. We have also told mayors and municipal managers from other municipalities that they should make it easy for our people to get water. They should have water tankers where necessary so that our people don’t struggle particularly those who are disabled,” said the Premier.

Police, Roads and Transport MEC Sam Mashinini said during the briefing that police will be out in full force to ensure people abide by the rules after President Cyril Ramaphosa banned gatherings of more than 100 people.

“We must make meaningful input to make sure that the virus does not spread. I think you can also testify to the point that the way it is spreading, is of great concern,” noted Mashinini.

He said there will be campaigns in public places such as taxi ranks promoting the importance of cleanliness and social distancing to limit the spread of the Covid-19.

Small church gatherings of less than 100 people would be allowed but police will be closely monitoring them. Taverns would not be closed but there will regular engagements with the authorities to ensure the numbers are kept at a minimum.

Cooperative Governance and Traditional Affairs MEC Thembeni Nxangisa said municipalities have been advised to minimise their public gatherings and only allow key stakeholders to attend meetings.

“You are aware that municipalities are undertaking public hearings for the IDPs (Integrated Development Plans) and budget processes. That process by law, requires massive participation of the people. We would want to reduce it to stakeholders and find a creative way to deal with that,” pointed out Nxangisa.

He said he will be with Maluti-a-Phofung municipal authorities to see how they are progressing with addressing the water situation in the area.

Some of the common symptoms of the corona virus attack include; dry cough, fever, sore throat and shortness of breath.

Preventative measures recommended by the World Health Organisation are: wash hands regularly with soap or an alcohol-based hand sanitiser; avoiding touching eyes, nose, and mouth with unwashed hands; avoiding close contact with people who are sick; covering the mouth when coughing or sneezing with a flexed elbow or a tissue and then throwing the tissue into the bin, as well as frequently cleaning and disinfecting touched objects and surfaces.