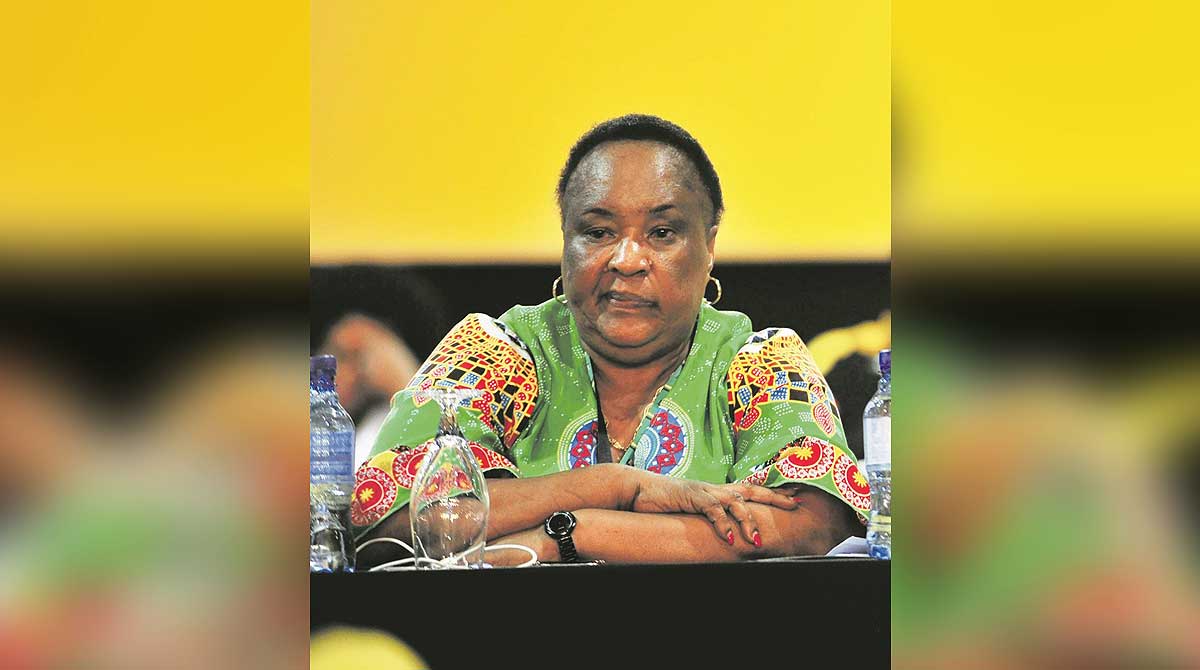 Free State premier, Sisi Ntombela has been dealt a blow following a damning high court ruling which favoured the head of department for Police, Roads and Transport Samuel Mthakathi.

The bitter and internecine tug of war involving Ntombela and Mthakathi comes at the backdrop of an attempt to illegally transfer him to head the department of Sports, Arts and Culture without following due process and obtaining his consent.

The ill-fated transfer was imposed by Ntombela despite the 20-point objection written by Mthakathi questioning the intended move and demonstrating that it was not in the public interest.

The court interdict vindicates the Free State Weekly’s report on an alleged existence of a ‘purge’ aimed at getting rid of top executives alledgedly viewed as a stumbling block towards accessing and controlling resourceful departmental budgets. More so, Ntombela’s coverted transfers have been slammed as targeting officials appointed during the tenure of former Premier Ace Magashule.

Following failure of internal objections to Ntombela against moving him to the Department of Sports, Arts and Recreation with effect from March 22, Mthakathi hauled the Premier to court in a bold action to exercise his rights.

In an unprecedent ruling this week the Bloemfontein High Court ruled in Mthakathi’s favour and slapped the Premier with an urgent interdict barring her from going ahead with the controversial transfer.

The Free State Weekly is in possession of the court outcome dated March 29 wherein Presiding Magistrate JJ Mhlambi ruled that Ntombela as the first responded be ‘interdicted and restrained from implementing and or effecting the impugned decision in any manner or whatsoever.’

The Free State Weekly can reveal on good authority that Premeir Ntombela has already transferred two heads of departments from their repsective posts to her office without clear job descriptions, rendering them idle ‘cheque’ collectors in her office. The fomer head of department for Sports, Arts and Culture, Stanley Malope and his counter part, Mokone Nthungwa, who headed the department of Social Development are currently sitting idle in the office of the premier.

“It doesn’t make administrative and legal sense that both HODs are stucked in the Premier’s office whereas both departments that they have been moved from remain without heads of departments. This is a clear waste of tax payers’ money, meddling and inteferance in admistrative functioning of departments, proving ulterior motives to loot state resources with ease once her preferred candidate takes over,” said a highly placed source.

The recycling of the two accounting officers brings the total number of heads of departments in Premier Ntombela’s to three, without featuring anywhere in the organogram and operational structure.

It is shocking and ill-considered in the history of any province for the office of the Premier to be operating with three HODs at a price tag of approximately R6 million, when it includes the incubent Director General, Kopung Ralikontsane who has been in the same department. The Free State Weekly can confirm that the salary scale for one head of department is around R2 million annually.

In her brief reply to Mthakathi’s 20-point objection, Ntombela wrote: “Kindly be advised that I have carefully considered the representation which you have submitted to my office. I have however concluded that the issues which you have raised are significantly outweighed by the public interest. I have consequently decided to transfer you in terms of Section 12 of the Public Service Act to the post of Head of Department for Sports, Arts, Culture and Recreation with effect from Monday 22 March 2021.”

Among objections raised by Mthakathi against being transferred was that Ntombela’s decision ‘lacks clear motivation as regards the reasons why she is of the view that his transfer would be in the interest of the public.’

He further writes: “Apart from the alleged challenges i.e. in sports that are not spelled out in detail, the nature of which is unknown to me, you have not given me adequate reasons why I am to be transferred to the department of Sports, Arts and Recreation. Of importance, I have not been given any explanation why I have been hand-picked from all other HoDs and DDGs, with similar competencies, skills and equally capable of performing a similar task.”

Mthakathi charges that Ntombela’s transfer comes at a delicate time of the year when all departments are nearing the end of the financial year for audit purposes.

In a sting presentation rejecting the transfer, he informs Ntombela that his transfer will have dire consequences for current budgetary and audit processes, and has potential to destabilise the operations of both his current and the proposed department.

Furthermore, he spells it to the Premier that he is currently overseeing 115 projects in need of his supervision.

Despite the above, and Mthakathi making his intentions of hauling Ntombela to court clear if she persists with the transfer, the Premier forged ahead with the contested transfer which subsequently suffered a blow in court.

Slating the transfer in a presentation to Ntombela, Mthakathi argues the intention to transfer him is premised on ‘mala fide’ motives that are not only unlawful, but fraudulent in nature.’

He makes shocking claims to the effect that since being HoD he has witnessed constant interference in the operations and functions of his department by Ntombela.

“This you did through issuing unlawful procurement instructions that I have not only declined to process, but refused to take part in,” he notes.

He further states: “The only inference that can be drawn in these circumstances is that the intended transfer is meant to replace me with an official that is partial enough to welcome your interference and implement your instructions however unlawful they are.”

This latest turn of events opens a lid on earlier reporting by the Free State Weekly to the effect that Ntombela was allegedly transferring HoDs without even consulting with their respective MECs, amid claims of an apparent drive to access their departmental budgets.

At the time there was no response from Ntombela’s office apart from backlash over what was termed ‘an apparent unwarranted attack’ against the Premier.

The Premier’s office back then accused the Free State Weekly of misleading reporting, with Ntombela’s spokesman Sello Pietersen taking to Facebook to vilify the report on alleged reshufflings disguised as transfers to purge undesirables from earmarked departments.

Pietersen wrote: “This is nothing but gross fabrication intent to mislead the people of the province and also seeks to drive a wedge between both Mr. Magashule and Premier Ntombela.”

Furthermore he said: “We wish to state for the record that the Premier has not ‘purged’ nor does she intend doing so to any official of the Free State Provincial government.”

The hysterical posting called the report ‘slander disguised as journalism’ and a “blemish to the noble profession of journalism.’

Despite this, documented evidence in possession of the newspaper accuses the Premier of arriving at the decision to transfer CFOs and HODs ‘for further of an ulterior and improper purpose.”

“It is my view that this proposed transfer has taken into account all the irrelevant factors to the exclusion of the relevant as to why I should remain in the department of Roads and Transport,” Mthakathi contends.

He asked why Ntombela did not transfer him to either the Department of Public Works or Agriculture and Rural Development which had vacancies for HoDs for almost two years regardless of their significance to service delivery.

Now the court judgement halting her ‘illegal, fraudulent and controversial’ move will remain as a deterrent to her intentions until final adjudication on the matter.

Shocking allegations linked to Ntombela’s dubious transfers point to the Premier having alledgedly crossed the line by approaching some HoDs persuading them to prioritise payments for her preferred service providers that allegedly sponsors lavage private life.

The Free State Weekly exposed the shenanigans related to illegal transfers of CFO, HOD and supply chain manager last month, wherein the Premier flatly denied any knowledge of the claims.

However the court action by Mthakathi laid bare Ntombela allegedly insidious plan to transfer hand-picked HoDs in an alleged plot to access departmental funds they oversee.

The move has now been slammed as part of a political agenda and a self-serving move intended to line her pockets and those of her cronies.

Meanwhile the Free State Weekly can reveal that the Free State province is set to be faced with more court challenges and ligation emanating from transfers of CFOs and controversial multi-million transversal contracts.