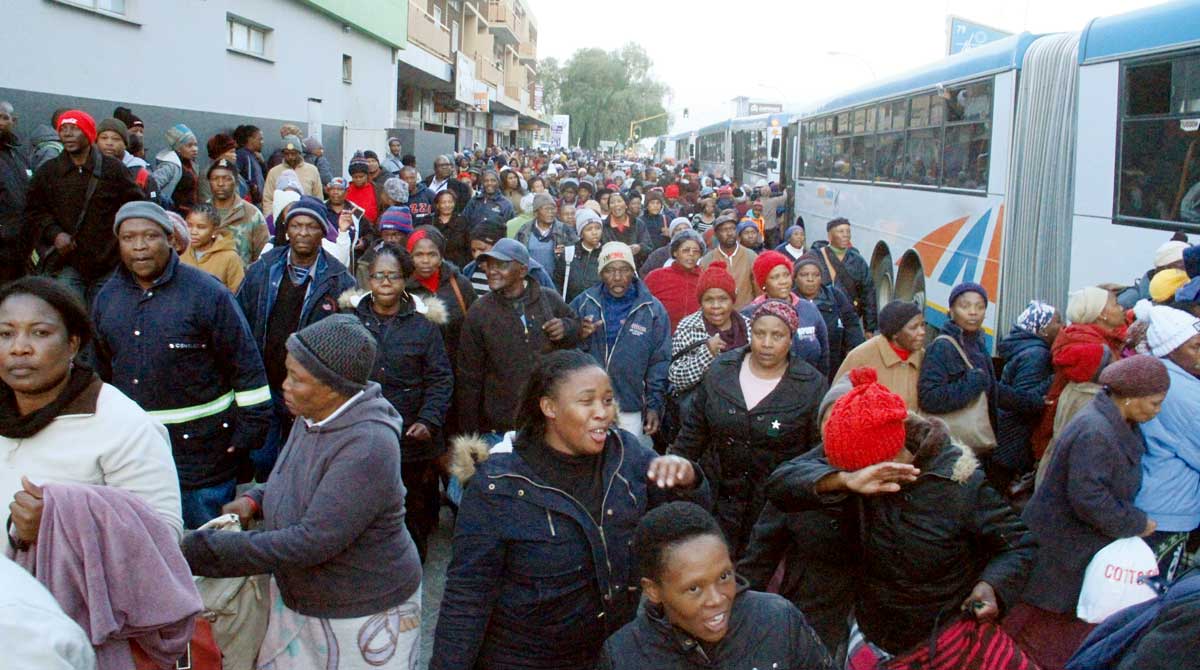 Three people sustained injuries this week during a two-day illegal strike by taxi drivers protesting over police traffic fines in the city, as they engaged in running battles with police.

The drivers complained the persistent fines were significantly eating into their daily takings.

Forty-two taxi drivers were nabbed and charged with acts of violence, police said in a statement of Wednesday.

Taxi drivers under the banner of the Greater Bloemfontein Taxi Association (GBTA) embarked on an impromptu industrial action on Monday until Wednesday, leaving thousands of commuters stranded and without means of transport after knock off time.

Many had to walk home or make alternative arrangements to be picked up as the drivers vowed to continue with their picketing. Students were also affected.

Police were forced to intervene after the striking drivers prevented Inter State Buses from ferrying passengers to their various destinations.

Groups of police officers deployed to monitor the situation around the city later engaged in long-running skirmishes with the drivers.

A video circulating on social media shows unidentified people throwing stones at moving Inter State Buses in a bid to prevent them from operating, with police vehicles in hot pursuit. Several gun shots can also be heard during the melee in the central business district.

Apart from traffic fines, the taxi drivers also bemoaned the alleged over-supply of buses which compete with them on the same routes they are licensed to service. The buses charge lower fares.

A student at the University of the Free State residing in Botshabelo, Sibusiso Xenxe, was one of the multitudes of people affected by the strike.

Xenxe said he was forced to find emergency overnight accommodation on Tuesday after he failed to get a bus home after school.

Another commuter, Rethabile Nkoai, said she arrived late for work on Wednesday due to the crippling strike.

Makhosi Valashiya, a taxi owner and member of GBTA, was quick to point out that the strike was not initiated by taxi owners but their drivers.

Valashiya said the drivers were perturbed that because of competition with the buses over commuters, they were failing to meet their set daily targets hence they decision to go on strike “over the influx of buses”.

“Another issue raised by the drivers is that they are constantly stopped and asked for permits by police whereas buses are hardly stopped and inspected,” he noted.

Valashiya insisted taxi owners were not part of the strike, which makes it illegal according to their operations, since no engagement and agreements were made to withdraw services.

The pandemonium however, came to an end on Wednesday following a high level meeting between Police, Roads and Transport MEC Sam Mashinini and taxi associations.

By yesterday (Thurs), sanity had fully returned to the city with taxis doing their usual business.

Mashinini said the strike by the drivers was unfortunate since it had negatively impacted on commuters.

He vowed to launch an investigation into challenges bedevilling the local taxi industry and to seek solutions to address them.

“I condemn all forms of violence that are affecting our commuters. We need to frown upon lawlessness and ensure that state authority is not undermined.”

The MECA also apologised to the residents of Mangaung for inconveniences caused by the strike, further appealing to the taxi industry to find better ways of dealing with their differences than instigating violence.

Police constable Mahlomola Kareli confirmed the arrest of 42 taxi drivers and the injuries of three people during the strike.