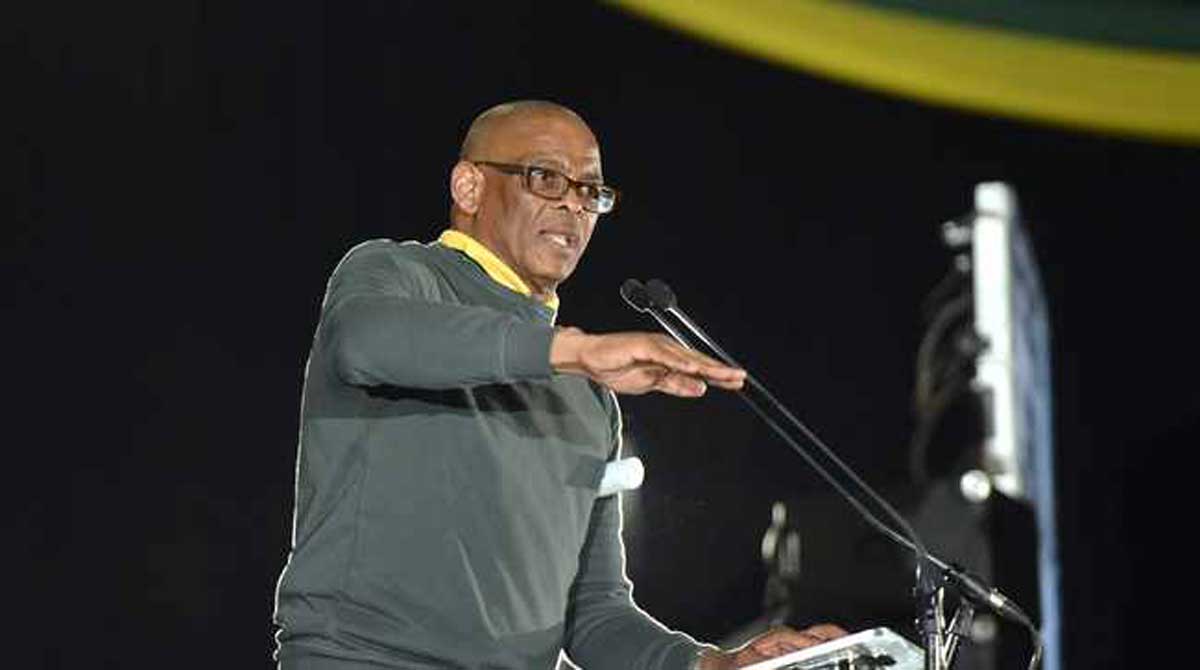 If ANC secretary general Ace Magashule could be at many places at the same time, yesterday he would have seen the roaring and royal support that he has amongst the rank and file of the ruling party across the country.

From the Free State – his home province where he is wildly popular,  the marches to the Zondo Commission and Lithuli House, to the Vhembe region in Limpopo where, like everywhere else across the country, he has endeared himself with the masses since the days of the liberation struggle, Magashule’s support is apt and unmistakable.

It is no wonder that ANC supporters have revved up support for the veteran political administrator amid claims that he may be arrested for alleged corruption.

His faithful supporters insist his reported possible arrest is aimed at tarnishing his image because of the uncompromising stance he has taken against ‘white monopoly capital’ and they are prepared to “die for him”.

Magashule speaking through his legal team at the height of sinister and unconfirmed rumour alleging his imminent arrest, says ‘bring it on’.

Since the story broke out over the weekend, there has been hyped public frenzy and mixed political reaction over the matter.

On Facebook users expressed support and solidarity with the former Free State premier, who has since been nicknamed the ‘Father of radical economic transformation’ in ANC circles.

News of his arrest spread fast like wildfire, and spiralled over into making breaking news on most national media platforms this week, including television and radio.

But the euphoria continues to dominate the country’s political landscape after the Hawks, the elite crime busting unit allegedly planning to arrest Magashule, came out vehemently distancing itself from any warrant of arrest on the ANC secretary general.

Hawks spokesman Hangwani Mulaudzi expressed worry that the ‘fake news’ disseminated regarding Magashule’s supposed arrest only serve to harm the unit’s crime fighting efforts and to discredit it.

In an interview with news channel EWN, Magashule’s counsel Victor Nkhwashu conveyed the SG’s ‘readiness and availability’ to answer to any charges against him.

Nkhwashu said Magashule is neither ‘worried nor surprised’ by the disturbing developments around him.

He confirmed that there has not been any formal communication with the Hawks informing Magashule of a plan to arrest him over corruption during the time he was Free State premier.

“We have not been formally informed about any arrest. However our client is ready and available should there be such a warrant,” indicated Nkhwashu.

The South African National Civic Association (Sanco) has vowed to support and defend Magashule from any attempts to remove him from office.

“Sanco Free State has learned with shock the alleged meeting between high ranking officials of the ANC and the NPA to arrest and embarrass the secretary general of the ANC, comrade Ace Magashule,” said Sanco Free State leader Gift Poli.

He noted the civic movement had also observed amendments that now allow for use of information gathered for prosecuting implicated persons.

“We want to warn those with evil intentions to use political platforms like the National General Council to advance their agenda and not to use the short cut,” said Poli.

“Our patience must not be tested. We want to remind the rented elements within the ANC that Ace Magashule was elected by conference and no any other structure will remove him from his position.”

Poli called on the ANC to summon the National General Council (NGC) where issues such as the alleged plot to unseat Magashule from office would be discussed.

Sanco remained resolute in defending those advancing economic emancipation of the people.

He added Sanco would not sit by idly and watch as the country is being ‘sold to the highest bidder.”

The civic movement would not also allow the Zondo commission and other law enforcement agencies to be used to settle political scores.

“It’s unfortunate that our glorious movement is infiltrated by counter revolutionaries conniving with white monopoly capital to derail the advancement of our people,” he said.

He claimed overtime, the league had observed “a carefully crafted agenda of using reactionary media and state organs to isolate certain leaders of the ANC, in particular Magashule”.

He added attacks on the former Free State premier were similar to the ones carried out on former president Jacob Zuma, and the same defences used for Zuma should be adopted in defending Magashule.

Booysen alleged the plot to nail the ANC secretary general is being carried out in stages, with the first being to use ‘untransformed and counter revolutionary media to consistently tarnish the image of those targeted.’

In so doing, he argued, the public is sold a negative narrative underpinned by falsehoods, character assassinations and allegations “which will never stand the test of time in a competent court of law”.

The second phase, involves carrying out ‘CIA kind of arrests’ and parading suspects in the media to peddle false narratives.

Booysen maintained this is done to communicate ‘a false message of guilt in the court of public opinion.’

Lastly, he added, the alleged conspirators would link all arrests to the political “Big Fish” which in this case is Magashule.

“We would like to warn all the organs of state, particularly the law enforcement agents, to resist the temptation of being political tools and proxies of political battles in the ANC,” cautioned the youth provincial secretary.

The outspoken youth leader warned ‘elements’ whom he alleged want to ‘deliver the ANC to their masters’ that they won’t succeed as they are being watched.

He further claimed the ANC has been ‘pre-ordered’ through funding of political campaigns towards election into political office.

“We know that the ultimate plan is to create a political embarrassment to the SG through concocting allegations and have the court case against him,” he said.

Booysen cited the aim with this is to be able to ask Magashule, to ‘step aside’ as a result of the charges.

The militant young activist vowed that the ANC youth league would never allow Magashule to be removed from office.

He urged party members across the spectrum to ‘fight tooth and nail’ against what he said is the blatant use of state organs for factional political battles.

The ANC in the Vhembe district has also voiced its dismay at the fake Magashule imminent arrest news.

“It is quite shocking to see how far and to what extremes some leaders are prepared to settle political scores and settle their failed commitments by arresting fellow comrades,” said the region in a statement

It said it was unfortunate that some leaders were prepared to embarrass the ANC in front of the whole country and the international community just to score cheap political points.

The Vhembe ANC youth league said it would mobilise all its sub regions in defence of Magashule, adding the same defence would be accorded all ANC leaders when the ‘law is applied illogically’.

Earlier yesterday, a group of ANC members gathered outside the party›s Luthuli House headquarters in Johannesburg under the banner ‘Hands off Ace Magashule’ in defence of the secretary general.