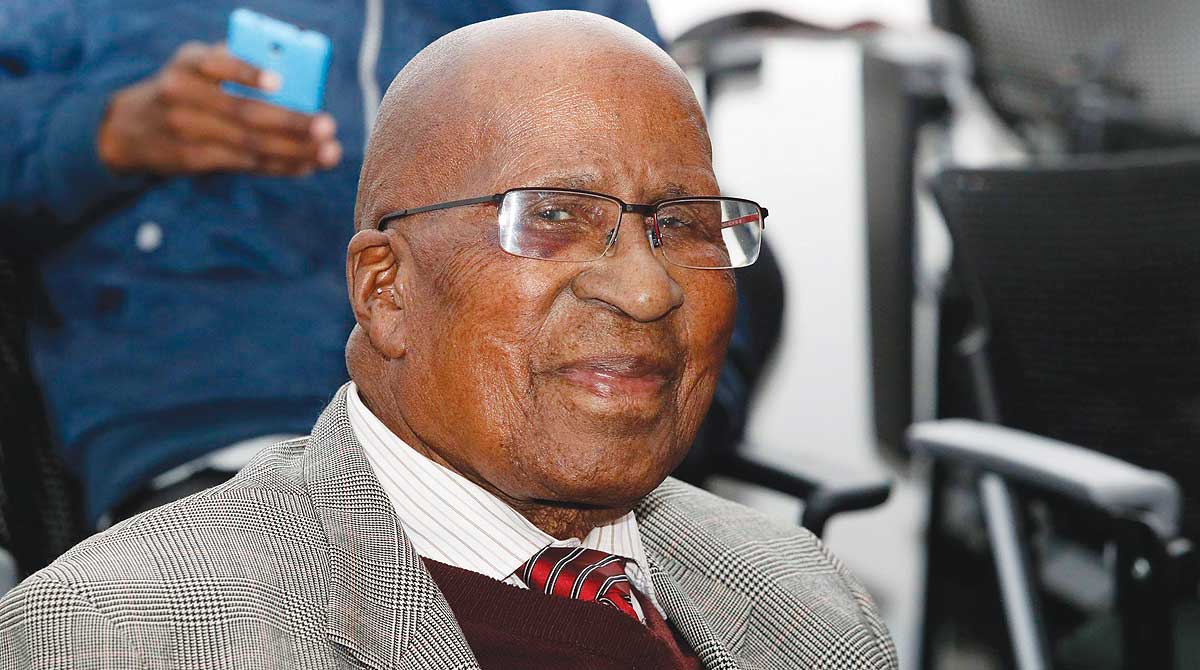 As tributes continue to pour in for Rivonia trialist and liberation struggle veteran Andrew Mokete Mlangeni who passed away on Wednesday morning, the ANC Free State chairman Sam Mashinini has described him as an ‘esteemed and disciplined’ cadre.

Mlangeni passed away after he was admitted to the 1 Military Hospital in Pretoria on Tuesday night following an abdominal complaint.

President Cyril Ramaphosa last night announced that Mlangeni will receive a Special Official Funeral Category 1 as a mark of respect.

Ramaphosa said the national flag will fly at half-mast from this morning until the evening of Wednesday July 29, when Mlangeni will be laid to rest.

A recipient of the highest order of acknowledgement by the ANC, ‘Isithwalandwe Seaparankoe’, he had just turned 95 on June 6. The order is given to ANC members who made an outstanding contribution to the liberation struggle.

Mashinini said Mlangeni – who was born in poverty in the then Transvaal in Gauteng – joined the ANC Youth League in 1951 and went on to be a fully-fledged party member three years later.

His activism saw him being elected as a branch delegate to the famous Congress of the People held in Kliptown in 1955.

In 1961 Mlangeni was among the first group of cadres to be sent for military training in China, where he met then leader of the Communist Party of China, Chairman Mao Zedong.

Mashinini said the late hero underwent training which comprised schooling in the techniques of secret communications, bomb-making, booby traps, and the Maoist philosophy of insurgency.

Upon his return to South Africa disguised as a priest under the name ‘Reverend Mokete Mokoena’, Mlangeni became a member of the insurgents’ high command and travelled around the country recruiting young people to go into exile for military training under the Umkhonto We Sizwe, the armed wing of the ANC.

Mashinini noted in a statement that Mlangeni was arrested in June 1963 at his home in the Dube section of Soweto. He was initially charged for trying to help a group of South African activists, among them former president Jacob Zuma

The ANC Youth League in Free State has also paid tribute to Mlangeni, saying it is saddened by his death.

ANCYL provincial secretary Reagan Booysen described the late struggle stalwart as a ‘great giant’, citing his death was closing an era of the struggle for freedom.

“He belongs to the fearless generation which declared a generational mission of freedom in its lifetime. They waged a formidable battle against the tyranny of apartheid in our country,” said Booysen.

He pointed out Mlangeni and his ilk never betrayed their generational mission they had set out to achieve. “This was realised through the elections of 1994, which ushered in the democratic South Africa we all enjoy today.”

Booysen said the league would continue with the struggle to attain economic freedom in fulfilment of a declaration by the ANC Youth League in 2011 at Gallagher Estate in Gauteng during its congress.

“We dare not betray this noble vision as the current generation. We shall continue from where this great generation left off. Indeed the great baobab tree under whose shade we rested has fallen, the great ocean whose waters quenched our revolutionary thirst has dried out,” he added.

Earlier on Wednesday, President Ramaphosa recalled that Mlangeni, together with other well-known anti-apartheid activists including Nelson Mandela, served long sentences at the Robben Island after they were convicted of high treason by the apartheid government.

Ramaphosa said it was with deep sadness that he had learnt of Mlangeni’s death. “The passing of Andrew Mokete Mlangeni signifies the end of a generational history and places our future squarely in our hands.”

He noted: “With his passing as the last remaining Rivonia Trialist, Bab’ Mlangeni has indeed passed the baton to his compatriots to build the South Africa he fought to liberate and to reconstruct during our democratic dispensation.”

When South Africa became a democracy in 1994, Mlangeni was elected as an ANC member of parliament, serving until the 1999 election. He later served a second term, from 2009 to 2014.

He was a member of both the Portfolio Committee on Defence and Military Veterans and the Joint Committee on Ethics and Members’ Interests.

Up to the time of his death, he chaired the ANC Integrity Committee.

Mlangeni was awarded the Order for Meritorious Service, gold class, in 1999 by President Mandela, the first head of state of democratic South Africa.

In 2016 he was granted the Freedom of Johannesburg and the Freedom of the City of London, and received the inaugural George Bizos Human Rights Award, named after the veteran human rights lawyer who represented the Rivonia trialists.

In 2017 he appeared in the documentary film ‘Life is Wonderful’, along with the then two other living survivors of the Rivonia trial, Ahmed Kathrada and Denis Goldberg.